For the first time since 1990, 2014 conforming loan limits will likely be lower than the year prior's limits, a move which would make it harder for U.S. home buyers and refinancing households to qualify for conforming home loans.

What Is A Loan Limit?

Loan limits are appropriately named. They are the maximum allowable loan size for a mortgage. Loan limits vary by product and region, and are included in a program's specific mortgage guidelines.

For conforming loans -- loans backed by Fannie Mae or Freddie Mac -- loan limits have been unchanged since 2006 when the government moved to raise the national limit to $417,000.

Conforming loans which exceed a local loan limit are commonly known as "jumbo loans". Jumbo loans are typically not backed by Fannie Mae or Freddie Mac, and are offered by local and national banks.

Jumbo mortgage rates are sometimes higher and sometimes lower as compared to conforming ones. However, because jumbo loans are not government-backed, eligibility requirements are often more stringent.

There aren't many low-downpayment options in the jumbo mortgage market. Plus, income and credit score requirements are often higher. This is why the 2014 conforming loan limit discussion is an important one.

With lower conforming loan limits, fewer home buyers will be mortgage-eligible in 2014.

Each year, near Thanksgiving, Fannie Mae and Freddie Mac announce their respective conforming loan limits for the upcoming year. The announcement is rarely made with fanfare or advance notice. This year, however, the FHFA has prepped the markets for a drop.

In 2006, conforming loan limits were raised to $417,000. Limits were held at that figure between 2007-2013 despite falling U.S. home values. Officials cited their want to make mortgage credit available to home buyers during a crucial stage of the housing market's recovery.

To reinforce this point, in 2009, loan limits were raised in certain "high-cost" areas; areas in which the median home sale price handily exceeded the national average.

High-balance conforming loan limits are expected to be lowered for 2014 as well. Unfortunately, we don't know by how much. The government has provided guidance other than to say that limits will be reduced.

If we use history as a guide, according to the Home Price Index, which is published by Fannie Mae and Freddie Mac's parent, today's home values are roughly the same as what home values were in 2005. In 2005, the conforming loan limit for a 1-unit home was $359,650.

2014 conforming loan limits won't likely drop that far. Rather, a 4% decrease may be more reasonable, which would lower loan limit for a single-unit property to $400,000.

Assuming a 4 percent change, the 2014 conforming loan limit chart would look as follows :

The final conforming loan limits for 2014 may be higher or lower than the list above. The FHFA won't likely declare them until late-November 2013.

What If My Loan Is Over The Conforming Loan Limit?

When the 2014 conforming loan limits are released, you may find that your mortgage no longer meet the guidelines of a Fannie Mae or Freddie Mac mortgage. This doesn't mean that you'll be suddenly mortgage-ineligible.

Homeowners whose loan sizes exceed conforming loan limits have lots of mortgage options. One such option is the FHA.

Plus, in many markets, loan limits for FHA loans exceed those of conforming ones. In high-cost areas, for example, the FHA will insure a loan up to $729,750 whereas Fannie Mae and Freddie Mac will place limits at just $625,500.

Borrowing via the VA is an option, too. VA loans are loans guaranteed by the Department of Veterans Affairs. VA loans can also be made at larger sizes than conforming ones, however, VA loans are available to military borrowers only.

Among the remaining ways to get financed are USDA loans for homes in non-urban city centers; and jumbo and private loans made by local and retail banks.

I Accept
During these uncertain times, Pike Creek Mortgage would like to remind our clients, partners and friends that we are following proper protocol to keep all of us healthy and safe.

While we are still open and fully functioning, we have put the following motions in place:
Our Polly Drummond office will be closed until further notice. Our Kirkwood Highway office will be limited to appointment only.

If you are paying your first payment, please mail to:
2100 Drummond Plaza
Building 2
Newark, DE 19711

As always, don't hesitate to contact us if you have any questions or concerns. Thank you! 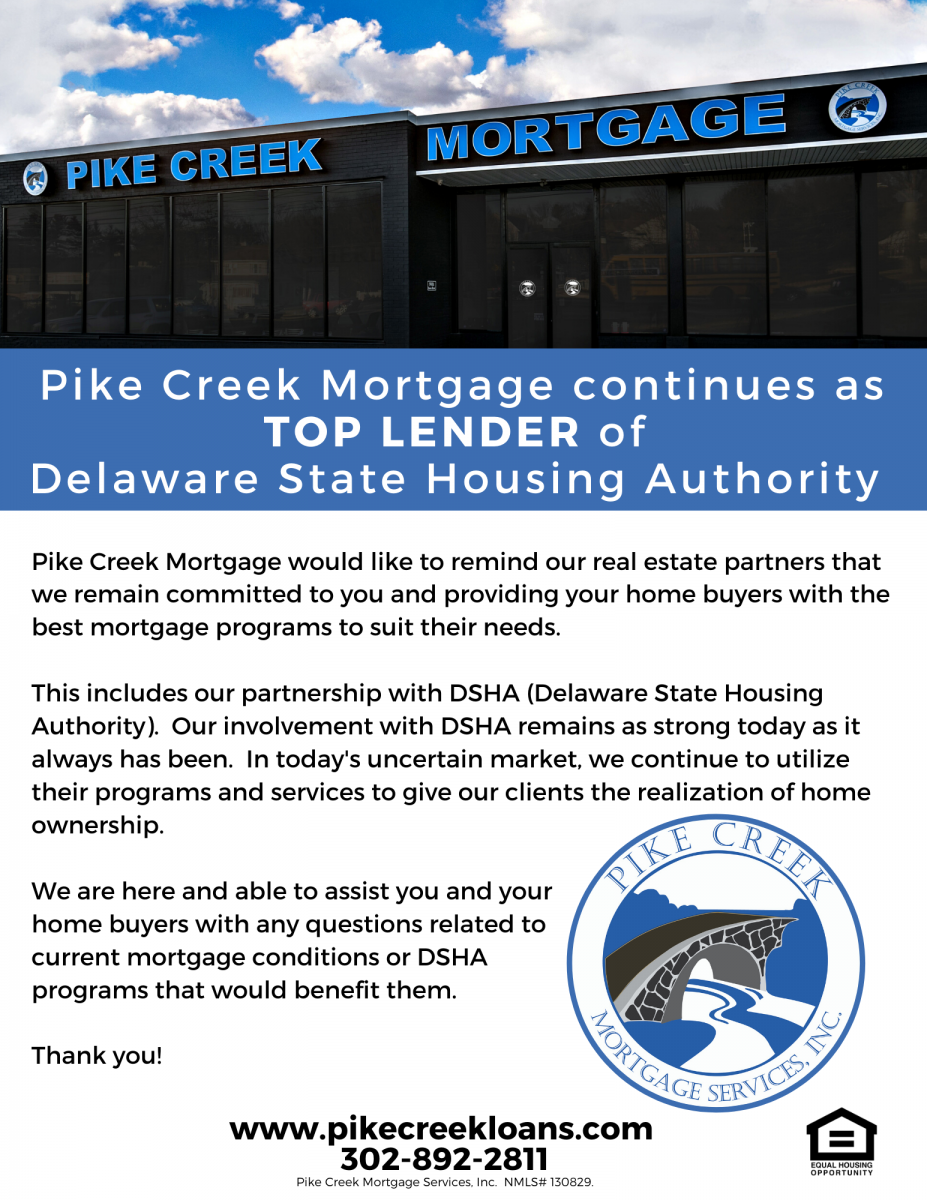